HSBC is one of the world’s biggest funders of fossil fuels – the 13th-biggest in the world. Since the Paris Agreement was adopted, HSBC has funded an eye-watering US $111 billion in fossil fuels around the world.

HSBC has long been addicted to coal, the dirtiest fossil fuel, providing billions to keep the coal-industry going. This is despite the United Nations saying that all new coal projects worldwide should be cancelled immediately to meet climate goals.

Recently, HSBC has been rocked by pressure from campaigners, and in the lead-up to its May 2021 Annual General Meeting was forced to announce phase-out dates for its financing for the coal industry.

But there’s a big loophole – HSBC has stakes in coal companies that together plan 99 gigawatts (GW) of new coal plants, emitting 15 billion tonnes of CO2 over their lifetimes. This is the equivalent of 32 years of the UK’s current emissions.

Its new climate policy doesn’t affect these ownership stakes, allowing HSBC to continue being an owner of some of the most destructive companies on the planet.

Supporting new coal plants to such an extent, in defiance of climate science, makes a mockery of HSBC’s claims to support the Paris Agreement, to say nothing of the bank’s huge support for the oil and gas industry. HSBC is one of the world’s biggest funders of fossil fuels – the 13th-biggest in the world. Since the Paris Agreement was adopted, HSBC has funded an eye-watering US $111 billion in fossil fuels around the world.

For any new coal plants to operate successfully, the Paris Agreement would have to fail. HSBC is profiting from companies whose business models depend on the failure of global climate goals.

HSBC knows this is a problem – in its response to shareholders following last year’s AGM, it noted that “a proportion of HSBC Global Asset Management’s funds, including index funds and ETFs which replicate the components of an index, include coal companies”.

HSBC can say it will take action on climate change, or it can profit from ownership stakes in coal companies. It can’t do both.

Complete this form to send a message to HSBC, calling upon the bank to close the coal ownership loophole, and withhold financing activities to companies and projects that would expand the scale of the fossil fuel industry.

HSBC holds stakes in 19 out of 32 listed companies within the world’s top 100 developers of new coal power stations, companies that are attempting to build another 99 gigawatts (GW) of new coal power capacity around the world. If these projects go ahead, they will generate 15 billion tonnes of CO2 over their lifetimes, equivalent to 32 years of the UK’s current emissions.

These projects range from those that have merely been announced, to ones moving through a planning or approval process, to projects under construction.

of the UK’s current emissions:  the amount of CO2 that would be emitted by coal projects in which HSBC has an ownership stake. 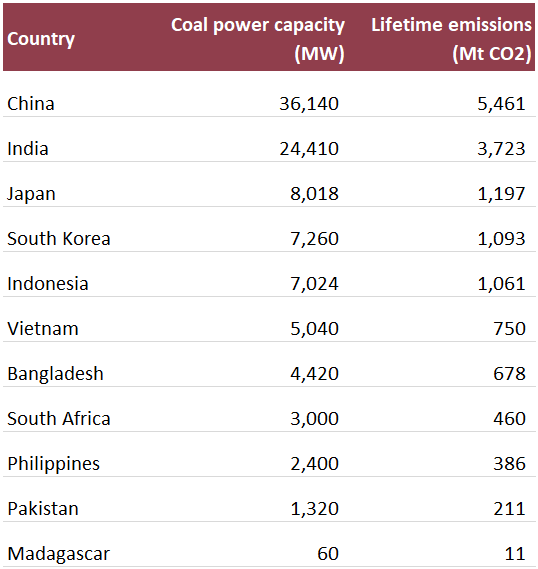 According to the Global Coal Plant Tracker, the Korea Electric Power Corporation (KEPCO) is pursuing another 12.2 GW of new coal power plants. According to filings lodged since October 2019, HSBC had US$6 million invested in KEPCO.

A significant portion of this coal power capacity (26%) was added in 2020, through the acquisition of China Light and Power’s stake in the proposed Vung Ang 2 coal power plant in Vietnam and the investment decision in the Jawa 9 and 10 project in Indonesia. Aside from their obviously unacceptable climate impact, both projects are riddled with other risks.

The Environmental and Social Impact Assessment for Vung Ang 2, reveals that the project has failed to adequately consult local residents, nor consider the cumulative impacts of the pollution it would add to the region. If built, Vung Ang 2 would sit next to a pre-existing coal power plant that is blamed for coating the nearby town in dust, while also part of the same industrial complex as the Formosa steelworks, which famously caused a toxic spill in 2018 that dissipated the region’s fishing community. There was also no alternatives assessment conducted for the Vung Ang 2 coal power plant, which was owned jointly by Mitsubishi Corporation in Japan and Hong Kong’s CLP until the latter pulled out of the project in December 2019, citing a new corporate strategy of aligning with the goals of being net zero emissions by 2050, leaving no room to build new coal power plants.

The Jawa 9 and 10 project is proposed to be built in the already heavily industrialised Banten province, less than 100 kilometres from Indonesia’s capital, Jakarta. Such are the concerns related to air pollution from Jawa 9 and 10, it was named in a lawsuit brought by residents to the provincial government in 2019.

The recent investment decision by KEPCO in these projects has exposed HSBC to the myriad environmental, social and financial risks these new coal power stations would bring.

According to information filed since November 2020 HSBC had US$14 million invested in Sumitomo Corporation, which is currently attempting to build another 5.7 GW of new coal power plants, according to the Global Coal Plant Tracker. This includes the 2.4 GW Matarbari power station in Cox’s Bazar, Bangladesh, as well as the 1.32 GW Van Phong 1 in Khanh Hoa province, Vietnam.

In Bangladesh, locals have reported a lack of transparency surrounding the Matarbari project’s land acquisition process, which began in 2014-2015, with many landowners yet to receive compensation for lost land. Construction of the plant blocked local canals and water gates designed to drain flooding caused by monsoons and cyclone-induced storms. This blockage exacerbated severe water logging, which resulted in the drowning deaths of five children in 2018. According to a 2020 Centre for Research on Energy and Clean Air (CREA) report, it is projected that pollution from Phases 1 and 2 of the Matarbari power station would result in 6,700 premature deaths over the project’s operating lifetime.

According to Lauri Myllyvirta, a former lead analyst at Greenpeace Global’s Air Pollution Unit, Van Phong 1 would produce toxic air pollutants at rates significantly higher than an average new coal-fired power station built in other jurisdictions including China, Japan, South Korea, the US and Europe. For example, compared to the average new Japanese coal-fired power station, Van Phong 1 would emit five times as much particulate matter, five times the sulfur dioxide (SO2) and nine times the nitrogen oxides (NOx).

In Vietnam, local residents near the proposed site of Van Phong 1 have told Vietnamese community organisations they are worried about the mitigation of the coal ash and the impact of discharge of cooling water on fish in the nearby Van Phong Bay. These organisations report that although the communities living on the proposed site of the coal power station have been resettled, little thought has been given to alternative livelihoods for farmers and near-shore fisherfolk. Meanwhile, Vietnamese authorities have evicted a 99-year-old Grandma Ca and demolished her home to make way for this coal fired power plant. She refuses to leave as the land they have been offered is not suitable for farming.

HSBC should ensure it’s not connected to these environmentally and socially disastrous projects.

NTPC is pursuing 17 coal-fired power stations in India that over their lifetimes would emit 3.1 billion tonnes of CO2, more than the annual emissions from the entire European Union. One of these is a proposed 1.32 GW expansion of the Singrauli Super Thermal Power Station. An August 2019 ranking of the world’s worst sources of the toxic air pollutant sulfur dioxide (SO2) found that Singrauli, the vicinity of the proposed expansion, was the world’s 5th largest hotspot for SO2 emissions.

NTPC is also pursuing the 1.32 GW Rampal coal power station in Bangladesh to which there is strong public opposition as it threatens the Sundarbans mangrove forests, a UNESCO world heritage site, home to the endangered Bengal tiger. HSBC is arranging finance for the dredging of Payra port in Bangladesh, which would handle coal for up to seven power plants as well as Rampal. 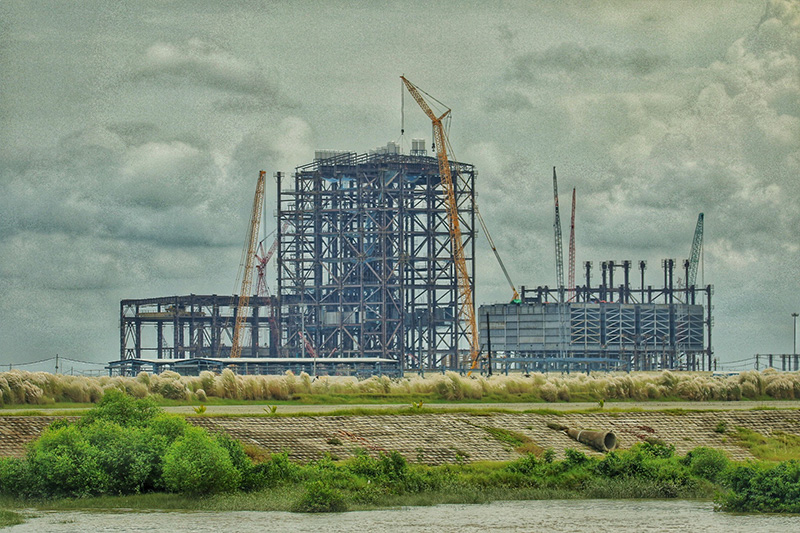 According to a 2017 report by Lauri Myllyvirta, a former lead analyst at Greenpeace Global’s Air Pollution Unit:

“The proposed 1,320MW Maitree coal-­fired power plant at Rampal would be among the largest point sources of air pollution in all of Bangladesh. Its emissions would worsen levels of toxic particles over all ofsouthwestern Bangladesh including the Sundarbans ecosystem and the localities of Khulna, Ashoknagar Kalyangarh, Satkhira, Bagamganj, Basirhat, Narsingdi, Noakhali, Basipur and Komilla. People in Dhaka and Calcutta, particularly children and the elderly, would also be harmed.”

“Over its operational lifetime, the plant’s emissions will increase the risk of stroke, lung cancer, heart and respiratory diseases in adults, as well as respiratory symptoms in children. Even if Bangladesh currently had zero air pollution, the plant alone would cause the premature deaths of 6,000 people, and low birth weights of 24,000 babies.”

What needs to happen

Ahead of the 2021 AGM, HSBC should announce that their new coal policy will include phasing out their ownership stakes in coal companies.

HSBC should not be invested in any company or project that is incompatible with the goals of the Paris Agreement, and be prioritising investment in companies and projects that accelerate the economic transformation towards the Paris Agreement’s goals.

In terms of its institutional investment, this means HSBC only invests in companies that are not seeking to attempt to expand the scale of the fossil fuel industry, and are not basing expectations of future revenue or growth on scenarios consistent with the failure of the Paris Agreement.

This would mean immediate divestment from the companies featured in this study.

HSBC should be ensuring any company or project it is invested in is actively measuring and managing down its exposure to climate-related risks.

TAKE ACTION: Send a message to HSBC: call on the bank to close the coal ownership loophole, and withhold financing activities to companies and projects that would expand the scale of the fossil fuel industry:

Market Forces examined shareholding data from Refinitiv Eikon for the top 100 parent companies with the largest coal power expansion plans in Urgewald’s Global Coal Exit List. We found that HSBC had ownership stakes in at least 19 of these companies. Using data from the Global Coal Plant Tracker (Jan 2021), we identified the number and capacity of the planned coal-fired power stations (those that are announced, pre-permitted, permitted and under construction) owned by these 19 companies. CO2 emissions data also came from the Global Coal Plant Tracker.

Shareholding data from Refinitiv was accessed in March 2021 and the value of ownership stakes were calculated by Refinitiv as at the date of access.