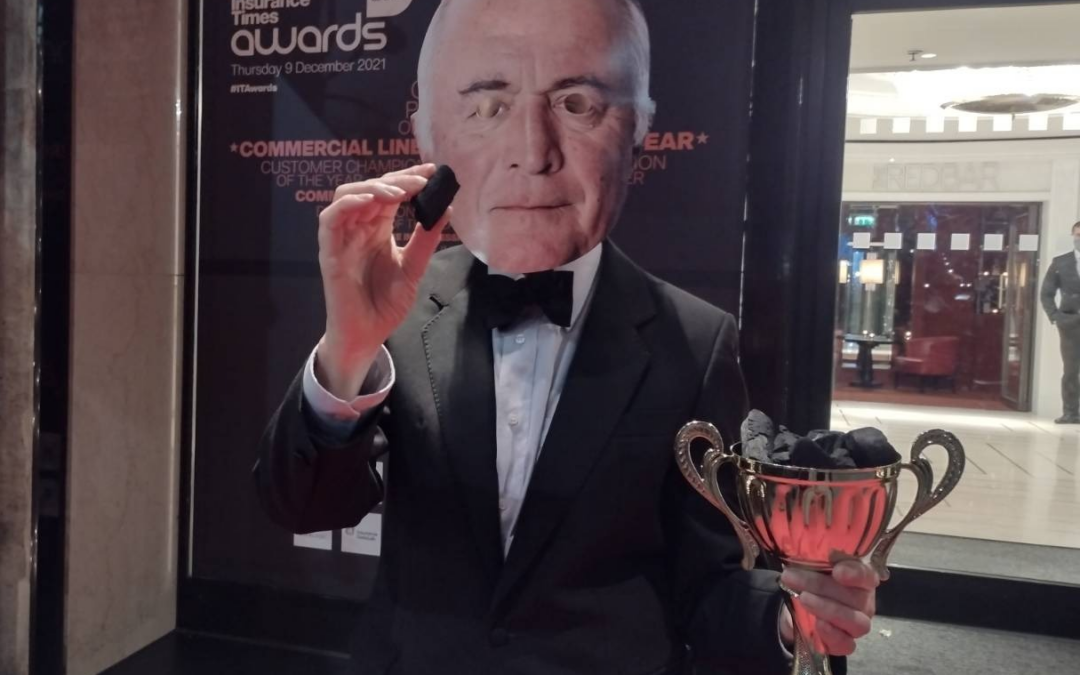 The 2021 Insurance Times Awards ceremony is happening tonight at the Grosvenor House Hotel, Park Lane, London. The awards “celebrate excellence and innovation and recognise the very best and brightest” in the UK insurance industry.

The ‘Coal Holdout Award’ award highlights Convex’s refusal to join 42 other major insurers in ruling out insuring the controversial Adani Carmichael mega-coal mine in Australia. “Stephen Catlin” (a Market Forces volunteer in a face mask) accepted the award outside the Grosvenor House on behalf of the company.

Convex regularly features climate commentators on their podcast, and has partnerships with ocean and arctic researchers. However, as other insurers flee the coal industry on climate change grounds, Convex has no published policy on coal, putting its own efforts to promote climate awareness at risk.

“Convex hasn’t been nominated for any of the 36 official awards tonight, but we didn’t want its failure to move on from coal to go unnoticed. Congratulations Stephen Catlin and Convex – for failing to join 42 major insurers and rule out the Adani Carmichael mine, you truly deserve the Coal Holdout Award!”

The Adani Carmichael coal mine and the Galilee coal basin it will open up are on such a huge scale that they put global climate targets in danger. Carmichael coal could emit 4.6 billion tonnes of CO2 – over ten times the UK’s entire annual emissions. If the other proposed Galilee Basin mines go ahead, the coal from this Basin alone could produce emissions representing 6% of humanity’s entire carbon budget for 1.5 degrees of warming.

The Willis Towers Watson 2020 Mining Risk Review notes that the retreat from coal by major insurers is “likely to be increasingly offset to some extent by the arrival of new markets such as Convex and Guide One as the rest of the year progresses,” which puts Convex’s refusal to rule out the Adani mine or publish a coal policy under further scrutiny.