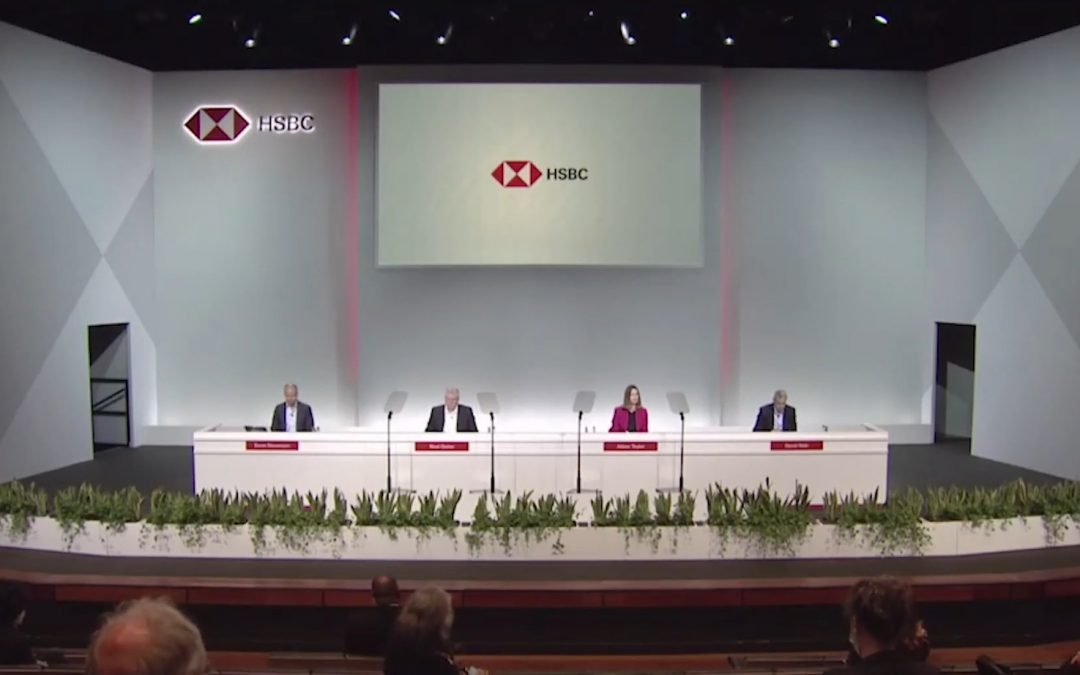 Question gymnastics were the order of the day at HSBC’s 2021 Annual General Meeting, as the bank’s management dodged their way out of answering seemingly endless climate questions from shareholders.

The run-up to the AGM had been rough for HSBC, with the bank being forced into pledging to stop funding the coal industry by 2040, fake HSBC billboards bringing up in British cities and two Market Forces investigations on their financing activities receiving widespread media coverage. We demonstrated that HSBC’s Asset Management Arm is invested in companies building 73 new coal plants that will cause nearly 19,000 premature deaths a year. We also released HSBC’s Dirtiest Deals, showing that a small number of HSBC fossil fuel deals will emit more CO2 per year than Canada or Brazil.

The bank dodged questions on its support for the world’s biggest polluter (Saudi Aramco), on its support for a gas project in Mozambique that is exacerbating an Islamist insurgery, on its Asset Management arm investing in companies building 73 new coal plants, on its involvement in supporting Adani Ports (who are helping the development of the Adani Carmichael mine) and its potential support for the East Africa Crude Oil Pipeline, among other climate questions. Tucker’s answer to a question from Friends of the Earth Mozambique about the bank’s involvement in gas projects in Mozambique seemed to ignore entirely the raging insurgency in that country, which is in part fuelled by gas development.

It’s clear that the intention was to confuse, obfuscate or to answer easier questions that hadn’t been asked.

And there was also some out-and-out misleading claims. The highly-respected International Energy Agency – which many banks use to plan out climate scenarios – recently declared that in order to meet ‘net zero by 2050’ climate goals – a goal HSBC has signed up to – there can be no new coal, oil or gas development from this year onwards.

Mark Tucker made the claim that the bank is ‘aligned’ with the IEA’s report, and that the bank is “doing all things to maintain consistency with that report.’ This must count as the AGM’s single most misleading statement.

To be clear – there is nothing in HSBC’s current policies that will prevent them from expanding the scale of the fossil fuel industry, something the IEA explicitly says must end – now. If the bank wants to be taken seriously on climate ahead of COP26, it needs to stop making small changes to its fossil fuel policy, and come out and say it will stop funding any company that is expanding the scale of the fossil fuel industry. That’s what the IEA says ‘net zero by 2050’ means. If Mr Tucker says that HSBC plan to ‘stay aligned’ with the report, then HSBC has got a lot of work to do and we will be holding them to account on it.

HSBC may have got into the ‘net zero’ pledge business thinking it was meaningless pledge, a way to paper over the fact they are one of the world’s biggest fossil fuel funders. But now it’s clear – ‘net zero by 2050’ means ending the expansion of the fossil fuel industry.