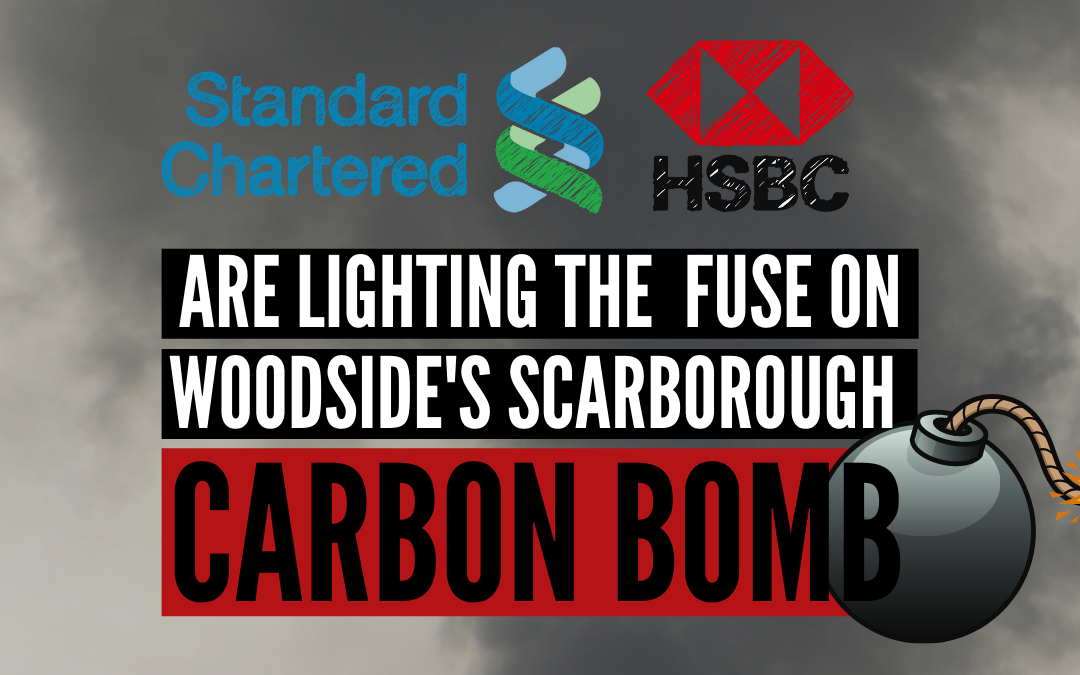 HSBC and Standard Chartered are amongst eighteen global banks that have loaned to a gas processing facility that paves the way for a carbon bomb [1] at the scale of 15 coal power stations.

HSBC and Standard Chartered are among the banks named as lenders to Global Infrastructure Partners (GIP) for its purchase of a 49% stake in gas giant Woodside’s new Pluto 2 LNG project. Woodside Energy is Australia’s largest gas producer and one of the world’s most dangerous corporate polluters. Woodside has said this deal is critical to its decision to go ahead with the Pluto 2 project and associated giant new offshore gas field, Scarborough.

We need to call these banks out for their climate hypocrisy! Tell the banks the Paris Agreement leaves no room for new gas projects.

It is estimated the Scarborough-Pluto project would enable 1.6 billion tonnes of CO2 emissions over its lifetime, equivalent to running 15 coal power stations for 30 years. That’s about 3.5 times the UK’s annual territorial emissions. The project, which is located in Western Australia, also poses unacceptable risks to fragile marine life and irreplaceable Murujuga Aboriginal rock art, which is under consideration for World Heritage listing.

If this project goes ahead, it could have irreversible consequences for meeting global climate goals. Independent analysis has concluded “Woodside’s proposed Scarborough to Pluto LNG project in Western Australia represents a bet against the world implementing the Paris Agreement,” while the International Energy Agency has confirmed “there is no need for investment in new fossil fuel supply in our net zero [by 2050] pathway”.

Yet both HSBC and Standard Chartered are providing the money needed for the project to go ahead.

Make sure HSBC and Standard Chartered know the community won’t stand for them lighting the fuse on the Scarborough-Pluto carbon bomb.

Despite claiming to take climate change seriously and having their own commitments to the Paris Agreement and net zero emissions by 2050, HSBC and Standard Chartered are repeat offenders when it comes to financing climate-wrecking fossil fuels.

HSBC is one of the world’s biggest funders of fossil fuels – the 13th-biggest in the world. Since the Paris Agreement was adopted, HSBC has funded an eye-watering US$111 billion in fossil fuels around the world.

Standard Chartered has funded US$31.4 billion in fossil fuels since the Paris climate agreement was signed.

Tell the banks the Paris Agreement leaves no room for new gas projects!